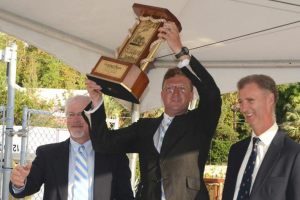 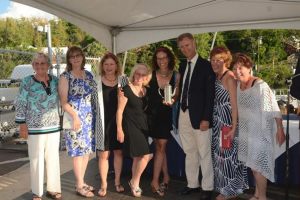 Royal Hamilton Amateur Dinghy Club, Paget BERMUDA: June 19, 2013: Based on provisional results, Roust, the smallest boat in the fleet, and a boat sailed double-handed as well, has won the top prize in the 2013 Marion Bermuda Race. The little Sea Sprite 34, skippered by Ian Gumprect of Oyster Bay NY and co-skippered by Mark Swanson of North Creek NY, won Class C and overall 1st Place in the Founders Division. At the prizegiving Saturday at the Royal Hamilton Amateur Dinghy Club, Ian and Mark will hoist the Founders Trophy for their exemplary performance.

Skipper and co-skipper were tired after the race and had to get towed in to the dinghy club because their engine wouldn’t start. It had worked all during the race to charge their batteries so the could use their autopilot. They chose to use the auto helm because they believe it can actually steer better than any human.

Ian and Mark said they think they probably sailed further west than any other boat and that helped them win when they carried a sustained wind from the west after the Northeast wind passed. “We never saw any real Gulf Stream current and the water never got warmer than 72 degrees.” Said Swanson. “We think we did well because we sailed hard and fast. We kept moving all the time choosing to sail a little off a chosen course to get more speed.”

Ian thought they did well because of preparation. “We had some new sails from Z Sails, and we used all of them. We added a high-clewed reacher that we used a lot and we had an asymmetrical spinnaker, too.” Ian said.

“We did well because we had a good team,” he added. “We changed headsails 2 times within 2 miles of the finish and 7 changes the day before.”

The winner of Class A was Gardner Grant ‘s J/120 Alibi from Westport CT was also sailed double-handed with co-skipper Stephen Fisk. Alibi’s corrected time was 4d 01:53:12. They could also sail with an autopilot because they were double-handed, but they have decided that human steering is better. Thinking opposite from the Roust duo, they used the auto helm for short periods to trim the sails, but then went back to sailing by hand as soon as possible. Grant said they went west of the rhumb line from Buzzards Bay to Bermuda in hopes of finding the predicted knuckle in the Gulf Stream, but they never found it.

“Nobody we’ve talked with found the southeasterly flow where it was predicted to be.” Grant noted. “We found the current flowing to the Northeast and we got directly across it as fast as possible. We had a lot of wind behind us and made a quick crossing. At the Bermuda end, the wind clocked right around and we had to tack 4 or 5 times in the final approach.

Spirit Of Bermuda, as the sole entry in the Classic Yacht Division, will win the inaugural Captain Ed Williams Trophy for the classic yacht with the best corrected time. The 112 foot long Spirit was co-chartered by Bermudian Preston Hutchings and Patrick McGee of Dallas TX and sailed by a crew of 32 men and women.

Shindig the biggest boat in the Founders Division finished more than a day earlier than Roust. The Andrews 68-footer took line honors by finishing the 645 nm course at 4:55:13 ADT/3:55:13 EDT on Tuesday morning June 18. Shindig wins the Blue Water Sailing Club Board of Governors Trophy.