The Marion-Bermuda Race was founded by two remarkable men: William David (”Dave“) Kingery and Geoffrey Richard (”Dickie“) Bird. In the summer of 1972 Kingery and his family arrived in Bermuda having spent a full year sailing from their summer home in Marion, Massachusetts to and from Tahiti aboard their 50’ Columbia sloop KERAMOS. Kingery, Bird, and their families met on the docks at the RHADC marina, quickly becoming close friends. 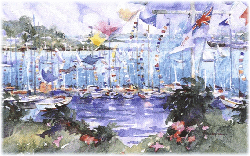 “We saw everything out there except hail and locusts”

When Hotspur (Marion, Massachusetts) took her own finish time off St. David’s Lighthouse in a brilliant sunset at 8:22PM Friday night, she cinched the Class D Cook’s trophy in the Marion to Bermuda Cruising Yacht Race. The little Rhodes 41 sloop took more than a week to cover the 645‐mile course. She was the last boat overall.

For Ron Wisner, Hotspur’s Skipper, this was his first ocean race. “For my first time, I have no regrets,” Wisner quipped. “But it was one hell of a first time. It wasn’t the reaching race as advertised. We had a beat most of the way and that is our worst point of sail on this old design. We even had to tack to cross the finish line.” Wisner said he took a conservative approach to the race. They had just a storm jib up for one twenty‐four hour period and a storm trysail and storm jib up for twelve more.

The gale they hit lasted for thirty‐six hours with winds reaching from thirty knots into the mid forties. They flew the two storm sails in the thirtyknot lulls. Hotspur’s cook, Rick Higgins, served up fried eggs and sweet rolls in the mornings and dinners included smoked salmon for the last night out. Higgins, known as Ace by his mates, said, “Captain Ron (later nicknamed Captain Ahab) worked hard to get the boat ready. This was my first ocean race. With wind in the mid forties and waves about 30 feet from trough to crest, we saw everything out there except hail and locusts.”

David Caso will take home the Gosling’s Rum Founder’s Trophy for 1st overall in the monohull fleet to be awarded to for the first time this Saturday at the 30th anniversary Marion to Bermuda Cruising Yacht Race. The new trophy is a wood tower with brass trim featuring an etching of the western Atlantic with a compass rose over the Bermuda area.

Caso’s Cherubini 50 Silhouette from Duxbury MA finished at 19:15:47 on Tuesday and has taken 1st place overall and 1st in Class D in the 30th Anniversary Marion to Bermuda Cruising Yacht Race. Kathleen a classic 72‐foot yawl sailed by Jim Feeney finished 1st in Class A and 2nd in Fleet.

Silhouette is a ketch and looks much like a classic Herreshoff design. Herreshoff said that gentlemen don’t sail to weather and since the race was a run and a reach, this boat really sailed. They piled on the mizzen, mizzen staysail, main, staysail and jenny or asymmetrical spinnaker. And they hit every puff just right.

What The Heck Does 'Corinthian' Mean?

The history of the Marion Bermuda Race is that since our start in 1977, we’ve always been a Corinthian sailing event. If you’ve ever wondered about the origins of this word and how it relates to sailing, you’re not alone. Many avid sailors and readers of Scuttlebutt had the same question, which was discussed in their online forum and addressed in their May 9, 2011 edition, by yachting historian, John Rousmaniere.

A question about the meaning of 'Corinthian' was asked last week in the Scuttlebutt Forum. "I've done all the Internet searches I can think of, done the OED, the library at the San Francisco Maritime Historical Park, and consulted the many reference books I own," noted Tony Johnson. "I've contacted the Seawanhaka Corinthian Yacht Club, where the concept got its start according to their website, and the Corinthian Yacht Club in Tiburon, CA. Nothing has been of much help."

When it comes to questions like this, few are better prepared to answer than yachting historian and author John Rousmaniere.